In Praise of ‘Ghana Freedom’: On the Nation’s Debut Pavilion at the 58th Venice Biennale

This paper analyses the historical significance and local relevance of Ghana’s debut Pavilion at the 58th Venice Biennale. By using the historical materialist thesis that an event in the past is not necessarily historical, the paper highlights how, beyond pomp, the Pavilion could have done more to confront the latency of conformism in its desire for representation and inclusion. The paper also offers how the Pavilion could have taken advantage of its happening on the 20th anniversary of the South Meets West (1999) exhibition to critically reflect on and update Ghana’s contemporary art history in addition to recounting postcolonial and transnational genealogies.

“But no state of affairs is, as a cause, already a historical one. It becomes this, posthumously, through eventualities which may be separated from it by millennia.”— (Benjamin, 1969, pp. 263)

“The biennial is just the container. If it’s not the biennial it will be something else.”— Bonaventure Soh Bejeng Ndikung (Mitter, 2020)

The Ghana National Pavilion at last year’s 58th International Art Exhibition of La Biennale di Venezia served to augment the fervent energy of contemporary art already simmering in its locality. The Pavilion staged a stellar intergenerational selection of six “multi-local”i artists from Ghana— Felicia Ansah Abban, El Anatsui, John Akomfrah, Lynette Yiadom-Boakye, Selasi Awusi Sosu and Ibrahim Mahama— whose works range between photography, painting, film, video, and installation. Stationed in the Artiglierie within the Arsenale, the Pavilion displayed the artists works in continuous cylindrical enclosures designed by architect David Adjaye, and executed with laterite soil couriered from Ghana. The nation’s debut outing at the Biennale, titled Ghana Freedom, summoned the “boundlessness” and euphoria in the spirit of self-determination promised in its mid-century Independence moment and epitomised in such cultural events as the World Festival of Black Arts— the first being Festival Mondial des Arts Nègres (FESMAN) which took place in 1966 in Dakar, Senegal, and then the Festival of Arts and Culture (FESTAC) which happened in Lagos, Nigeria, in 1977. “There is no longer any need to look back in the same way as an act of reclamation or reaction”, writes the curator Nana Oforiatta Ayim, since “these pathways remain with us and evolve”(Ayim, 2019, pp. 31).

The emancipatory ideal summarised in the titular of the exhibition is a poignant basis for this evolution given the colonial mediation of Ghana’s formal education in general, and art education in particular (seid’ou, 2014; seid’ou, 2016). In this regard, Ghana Freedom could be said to have countenanced an approach to the practice of art that is unconstrained by the de-contextualised imposition of the beaux-arts tradition which became ingrained through colonial instruction in the Gold Coast (pre-independence Ghana) from the late-19th century to the late-1950s, and which prevailed in the postcolonial mediation from then till the first decade of the 21st century. Exhibitions of this dispensation predominantly lacked curatorial direction. Indeed, the Ghana Pavilion, however obliquely, can also be said to have announced the inventiveness of emergent exhibition practices in the country. For example, Ibrahim Mahama’s early site-oriented and itinerant exhibitions in public places is a pragmatic and critical response to the derelict infrastructural conditions an art practitioner in the country has to contend with. Mahama’s attitude to this systemic neglect is traceable to the interventionist ethic and affirmative politics of blaxTARLINES KUMASIii. 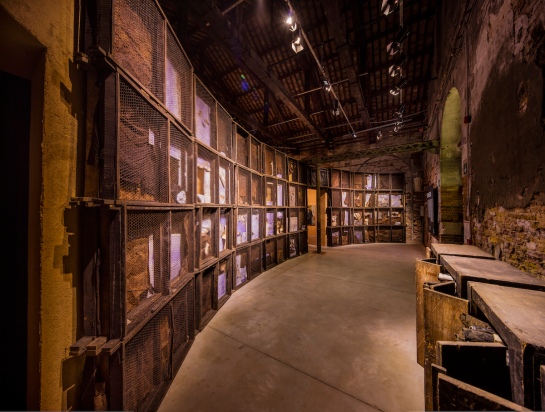 It goes without saying that  the spectacular occasion of the Pavilion accumulates cultural capital for the nation in asserting a compelling place and reputation as far as the global mainstream of art is concerned— more especially for a nation which has been treated as a footnote in literature on the history of art in Africa.  It is therefore our task to, so to speak, “brush history against the grain” (Benjamin, 1969, pp. 257) by practically intervening in it through such exhibition making ventures. In this vein, the success of the Pavilion highlights two major points for discussion.

The first is a dialectical situation. At a time when cultural institutions and producers are enduring famishing conditions as far as state support or infrastructural systems are concerned, the state has demonstrated that it is possible to alter this fate— seeing as the Ministries of Finance and that of Tourism, Arts, and Culture, respectively supported and commissioned the Pavilion. But now that the impossible has happened, one would have thought that prioritising a National Pavilion would  pave the way to launch serious longterm cultural policies ensuring continued presence in Venice itself, and also to invest in and build the necessary economic and cultural support structures for those local practitioners who are in dire need of it. As this is yet to happen, it will be crucial for Ghana to sustain the legacy of the Pavilion beyond the rhetoric of representation, even if it turns out to be a one-time affair.

Secondly, turning our attention to local relevance, the intention of the organisers to, later that year,  bring the exhibition to the National Museum of Ghana to be able to show it to local audiences and to generate new knowledges has yet to materialise, for whatever reasonsiii. This is unfortunate given the curator’s unequivocal concern for institution building and the “possibilities of artistic development in Ghana itself” (Ayim, 2019, pp. 140). If we keep in mind, apropos Borges, that every exhibition, at any given moment, based on its arguments or claims, “creates its own precursors” and therefore holds the potential to alter our conceptions of both past and future within that genealogyiv, then it presently counts as a missed opportunity not to have optimised Ghana Freedom in terms of creating history rather than solely staging one. What I mean is that the exhibition could have served as an epistemic site through which to  actively produce and update the history of contemporary art in Ghana. For example, by citingv or acknowledging the timeliness in the return of the exhibition to the National Museum falling on the 20th anniversary of South Meets Westvi— the seldom talked-about contemporary art exhibition of African artists based on the continent and in the diaspora which also took place at the National Museum in 1999 with an artist lineup including Atta Kwami, Tracey Rose, and Yinka Shonibare— in addition to such “precursors” as FESMAN, FESPAC and “Authentic/Ex-centric”vii.

Such an instance would have contributed to the intellectual legacy of Ghana Freedom in fulfilling the task of theorising the newly emergent curatorial and artistic paradigms in Ghana, all the while establishing the critical connections, differences, and evolutions between postcolonial and transnational antedatings of such political attitudes to exhibition making. This is especially important when we take the emancipatory promise of contemporary art seriously by considering the exhibition as a system that is not  only meant for [re]producing spectacular displays, while taking the commodification of art for granted, but as one which deploys the convergence of symbolic and material consequences enveloped in the immanent tensions of history and power. (Particularly when we acknowledge that the National Pavilion structure of the Venice Biennale impedes the institution from turning towards the non-imperialist substance of contemporary art.ix)

It remains to be seen how far representation of culture as the sole basis of participating in such blue-chip events as the Venice Biennale can get us (or any nation with egalitarian aspirations for that matter). Let us also not forget that biennales have not always existed, nor should they necessarily always exist in the futurex. Accepting this, at least, cautions us not to take its existence as well as what it promises for granted. If we succeed in the latter it breeds conformism which can be opposite to true freedom. To boot, the present COVID-19 pandemic has gone a long way to expose the fragileness of existing exhibition conventions as it threatens to revolutionize our economic, socio-cultural, health and [geo]political sectors on a planetary scale. The institutions by which we traditionally associate the production, circulation and experience of art— i.e. galleries, museums, the art market, etc.— have all suddenly ground to a halt and are having to structurally rethink their modus operandi. Therefore the future of exhibition making, as we know it, is what is currently at stake. We are tasked, now, as in previous times in history, to be more inventive with the exhibition form and Bonaventure Soh Bejeng Ndikung, artistic director of Sonsbeek (2020-2024), articulates this grammar of contingency well enough in the epigraph.

Where Ghana goes from here in verifying art as an egalitarian universality and creating particular models to suit its milieu is entirely up to us, its protagonists. And so the question becomes, when such real threats and crises have paled the superficiality of representation (in other words, when all the pomp and pageantry of Ghana Freedom has disappeared), what will its historical substance be posthumously based on?

***A version of this article has appeared in the project Exploring Visual Cultures— a joint transnational project run by universities and museums all over the world.

ii Both Mahama and Selasi Sosu are alumni of KNUST and active protagonists of blaxTARLINES who espouse these transformations. This internationally networked collective has been functioning as the contemporary art incubator in the Department of Painting & Sculpture in Ghana’s foremost Art College at the Kwame Nkrumah University of Science & Technology (KNUST) since 2015, and has radically upended the hegemony of salon style display formats erstwhile ubiquitous in commercial galleries, hotel lobbies, and other spaces which had contrived the realisation of artistic potential primarily for the patronage of tourists.

iii Nana Oforiatta Ayim confirmed in her lecture in ibid. (in June) after its opening on May 11th that the show would be at the National Museum of Ghana later that year.

iv I appropriate this thought from Jorge Luis Borges in his essay Kafka and his Precursors (1951).

v By citing, I do not mean merely mentioning (since the curator succeeded in mentioning FESMAN, FESPAC and “Authentic/Ex-centric” as precursors), but through curatorial research, and coming to terms with their historical, theoretical, and aesthetic substance and formulating an argument that deals critically with the claims and implications of these events through an analysis of their significance to our own epoch.

vii Oforiatta Ayim acknowledged her debt to Salah Hassan’s and Olu Oguibe’s curated exhibition at the 49th Venice Biennale in 2001, Authentic/Ex-centric: Africa In and Out of Africa. See Ayim (2019. pp. 140).

viii Oforiatta Ayim commented on the problematics of this in our public conversation in op. cit. @thestudioaccra. (2019). Taiye Selasi also points at this issue in her catalog essay.

ix The curator of the Pavilion, Nana Oforiatta Ayim, states her motivations for realising the Pavilion as such: “One of my driving forces [for being in Venice] is this idea of representation— of voice, of narrative— of who gets to speak the narrative.” She made this statement in a public conversation I had with her at @thestudioaccra. (2019, June 27). Ghana Pavilion Venice Biennale: Conversation with Nana Oforiatta Ayim. [Facebook post].https://web.facebook.com/accrastudio/photos/a.1118364178194088/2491384694225356/?type=3&theater. Audio of lecture is in author’s archives, courtesy @thestudioaccra.

xI appropriate this thought from Walter Benjamin who, in a similar spirit of contingency, was speaking particularly of the novel form in literature. See Benjamin (1998. pp. 89).