Modernist architecture in the early twentieth century aimed to reflect the shift in industrial society from manual to mass production. One of the ways it achieved this was to render the surface of its buildings in a way that depicted no representational motifs illustrative of the building’s purpose. This consequence of modernity had jettisoned all decorative and stylistic conventions in the classical attitude to the architectural skin in favour of a kind of utilitarian essence according to which its elements were composed— for instance, modular grids organized into simplified rectilinear forms emphasizing liberal ideas of democracy and individualism as well as expressing the capitalist logic of standardisation became its characteristic idiom. The buildings were designed to emphasize structural relations as much as functional value primarily through the use of glass, steel, and reinforced concrete1. The aesthetic imperative was one committed to achieving enormous levels of transparency on the facade of the building envelope by opening “its walls like curtains to admit a plenitude of fresh air, daylight and sunshine”2 (figs. 1 & 2).

These principles animated so-called International Style architecture whose less neutral and more expressive variant, namely Tropical Modernism— responding particularly to the tropical climate by treating the building facade as a porous membrane that responds to natural ventilation3— also transformed the skylines and landscapes in countries from Ghana to Israel, Brazil, Colombia and others during the late colonial period into the Independence era and beyond.

In tandem, high Modernism was also making strides to surpass naturalistic or representational traditions in modernist painting and sculpture so as to emphasize opticality as such. “Self-definition” had become the mantra of this paradigm which, in this context, meant a kind of purity where the essence of the painting medium was considered strictly in terms of the properties of pigment, flatness of surface and shape of the support while upholding the two-fold pictorial conventions of “flatness, and the delimitation of flatness”4. For sculpture, which is already in the domain of three-dimensions (a forbidden zone for high and late modernist painting), the combo of shape and colour had become crucial factors to cleanse or cure its surface from literalness or “objecthood”5, which simply means intentionally securing the sculpture from any arbitrariness, towards muteness and authenticity, with the supreme purpose of uniformly absorbing6 the disembodied eye(s) of its spectator(s). In pictorial terms, the structural hierarchy between literal shape (boundaries of the canvas) and depicted shape (content of the canvas) privileged the latter over the former in terms of value. Later mid-century movements in art— Minimalism, Conceptualism, Institutional Critique, Pop Art, Feminist art and others— will problematize these purist and totalistic notions and pervert them altogether. Postmodern architecture from the late 1960s also reinstated representational mechanisms in its treatment of the building envelope as a gesture of critique towards its predecessor.

If Elolo Bosoka’s preoccupation with “flatness, objecthood and theatricality”7 in his solo exhibition Lines, Planes and Ridges in Between (2018) seems to be responding to such dated formalist discourses in art and architecture, then his speculative approach extends them with the extra elements of materiality and contingency. In his ensemble of objects, situations and encounters created with fashioned and found objects— including industrially woven Polypropylene raffia sacks for bagging various commodities, used tomato paste cans (a standard of measurement for commodities in open markets and other sites of exchange), wooden shelves, video on screen and light fixtures— the artist ventures into the realms of contemporaneity8. Pictorial, sculptural, installation and architectural forms are subsumed into the generalized category of objects, capturing the artist’s indifference and sensitivity to the materials and mediums employed. 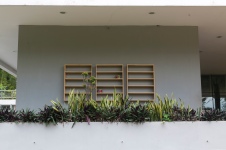 The used plastic raffia bags are theatrically treated in the following ways: 1. Montaged and stretched onto wooden frames to achieve flatness in a painterly sense (fig. 5) and 2. Scorched with electric burners to transform them into eerily wrinkled concatenations of indistinctly seared tapestries (fig. 6) which are stretched out on the floor, stacked on top of each other or hung on vertical elements. His montaged panels appear flat and pristine but a closer inspection punctures this guile with evidence of an arbitrary “hand” through sewn patches, frayed ends or the bare materiality of slits in the fragile ribbons of the woven bag consequent of the pressure applied in stretching them on wooden frames. Variations in colour, text and other symbolic traces emerge as accidentals natural to the synthetic material. 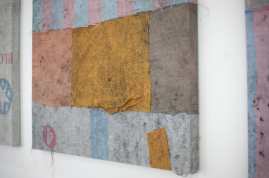 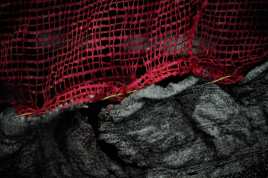 Detail shot, Through walls 2018. Lines, Planes and Ridges in Between exhibition, (2018). Photo by Elolo Bosoka.

Architecture is necessarily bound to the question of use or function in a way that art is not. The elevated volume or upper level of the low-rise modernist structure of the Senior Staff Club House9 (fig. 8) is supported by a series of rectangular columns, slab and a lower volume. Apart from the building’s fenestration and modular grid-screened facade, this form of elevation adds to the several passive cooling techniques achieved in the building. It goes without saying that the building also demands visitors to submit to the rhythm of its interior and exterior design.

In terms of spectatorship, Bosoka’s angular frames, triptych wooden shelves, video on screen, and indistinct plastic raffia tapestries all correspond to a frontal orientation for the viewer who becomes transfixed before them. For this to happen the work demands the viewer’s attention. And this retinal attentiveness (which is synonymous to absorption) is what, at the same time, causes disinterest in the interior and exterior peripheries of the architectural context in a traditional exhibition setup. But since the artist nominally includes the building as a component in the exhibition itself he actively complicates the effect of total absorption as the works toggle between asserting their self-importance and acting as backdrop or lure to other equally interesting experiences (figs. 7-9). One’s awareness of the architectural dimension sharply attunes their senses to the plurality of existential elements at play within that given moment. They are not only called upon to gaze at things but to also, for example, participate in a game of snooker, watch a TV show, have a drink, embody the coolness of the building’s loggia and the temperance of natural and artificial lighting, and so on and so forth.

In short, the architectural presence, in its scale, content and form, undermines the effect of pure opticality thereby dialecticising the tensions between absorption, distraction and participation within the exhibition space when it becomes an active component in the ensemble of things. These parameters beckon us to wander within the domain of the exhibition site as we would habitually do with any other habitable environment.

1 Walter Gropius, leading figure of this formalist movement (what was then referred to as The New Architecture), in celebrating the age of machine production states that the “fresh technical resources have furthered the disintegration of solid masses of masonry into slender piers, with consequent far-reaching economies in bulk, space, weight, and haulage. New synthetic substances— steel, concrete, glass— are actively superseding the traditional raw materials of construction. Their rigidity and molecular density have made it possible to erect wide-spanned and all but transparent structures for which the skill of previous ages was manifestly adequate. This enormous saving in structural volume was an architectural revolution in itself.” See Walter Gropius. The New Architecture and the Bauhaus. 1965. Trans. P. Morton Shand. The M.I.T Press, Cambridge, Massachusetts. pp. 25.

3 Maxwell Fry and Jane Drew outline what they consider to be the “three main considerations influencing architectural design in the tropics” as 1) The people and their needs, 2) climate and its attendant ills, and 3) materials and the means of building. See Maxwell Fry and Jane Drew. Tropical Architecture in the Dry and Humid Zones. 1974. Robert E. Krieger Publishing Company, Huntington, New York.

5 See Michael Fried’s Art and Objecthood (1967) where he outlines what for him constitutes art and non-art in the high Modernist canon.

6 For a detailed treatment of this concept of absorption see Michael Fried’s Absorption and Theatricality and Art and Objecthood.

9 The Senior Staff Club House was constructed in Ghana’s Republican era in the 1960s and was designed by Professor John Owusu Addo (b. 1928). Owusu Addo’s iconic projects include the Unity Hall in KNUST, Bomso Clinic in Kumasi and Cedi House in Accra.